Today - I've had the privilege of attending a Khang Le workshop. He is a very famous concept artist and I've been following his artwork since high school.

Concept art is slowly becoming more like production work. Concept artists now need to do motion graphics and use 3D programs like zBrush. I've been hearing the same thing from many different industry artists at the Massive Black workshop. The bottom-line is painting in Photoshop isn't going to cut it anymore.

Abstract Painting Method Demo
1) create an abstract composition with simple greyscale values and GRAPHIC shapes.
2) Overlay with a finished painting he previously did until you get something you like.
- This is a method that surprises you. Even you don't know where it's going.

This workflow helps with a couple of things:
a) You don't have to sit around and do thumbnails/ color studies
b) There is already "free"photo texture in your painting before you start.  In addition, using photos will push you to design in directions you didn't think about before.
c) You can use the "noise" to inspire you in your image. Keep what works, and paint over what doesn't work. In my opinion, this method saves you a lot of brain power. Assuming appropriate style and subject matter. 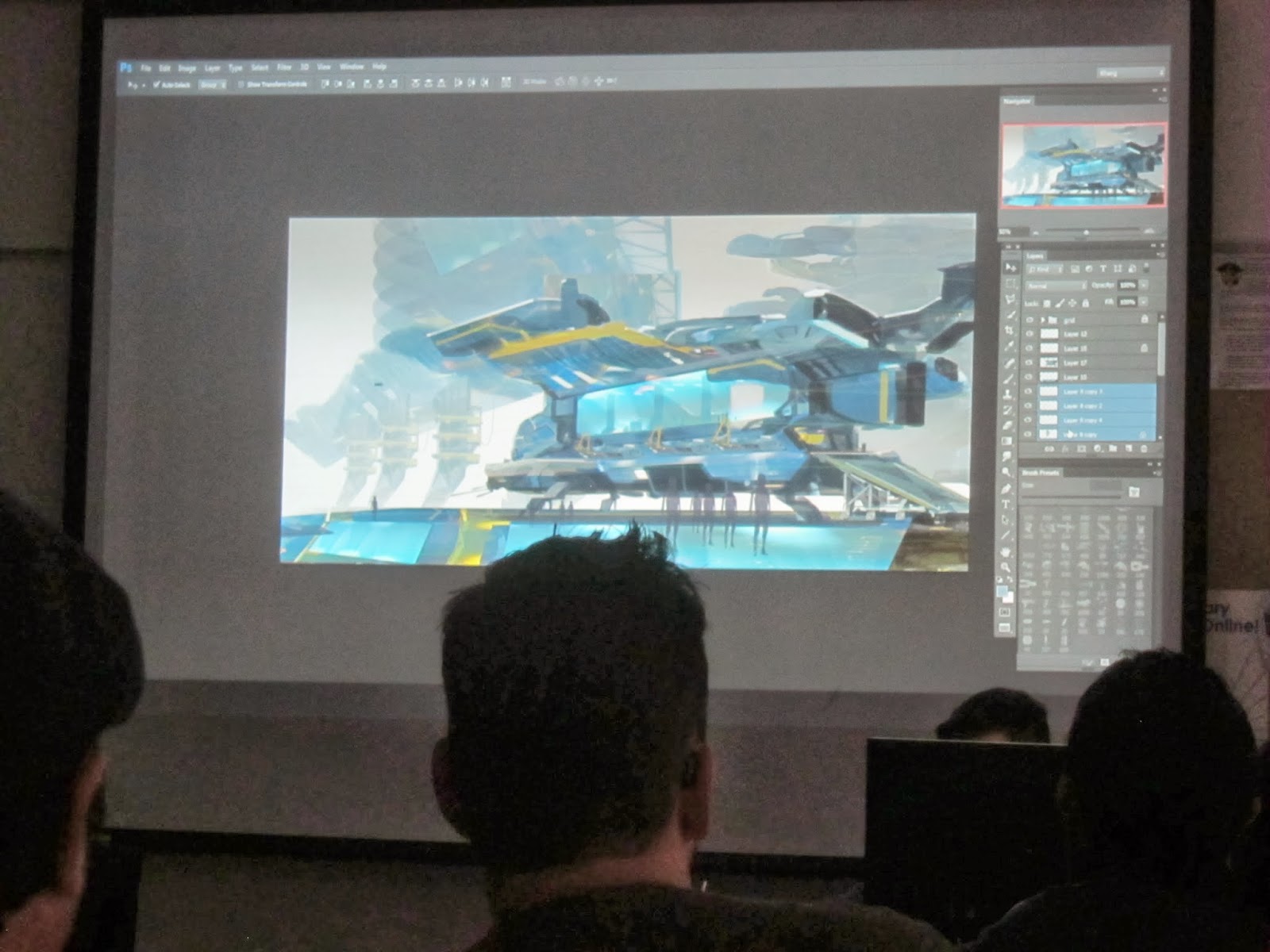 Khang does a lot of what some people might call "cheating."He will paint something one time, and then duplicate it over and over with different sizes and values. Even the "people" of the image were created using a "people" brush with "size jitter. This method allowed him to create multiple people of different sizes. He just erased and adjusted some limbs to give the illusion of variety. He will also use the same part of the image, and use it as texture for other parts of the images.

This method accomplishes multiple things:
1) establishes perspective
2) saves time and energy
3) helps created a unified form language and color pallets
3) Most importantly… it feels less "precious." By not investing as much time into each part of the painting, he is that he would free to paint over, delete, or cover up any part of the painting without feeling too bad. He is willing to sacrifice a small part of the painting for the greater good of the illustration. This is easier when not much time were invested in a single part of the painting.

Khang said "The most important thing is that you are willing to lose any part of your painting. It's not precious. If it doesn't work - just take it out. Work smart. Don't' work too hard."

People respond to polish, not innovation.
Khang has a really refreshing insight on the matter of execution. He recommend that when taking on a task - don't be overly ambitious. Have it be about 70% of what you max capability is. This way you can finish the job, and not be too mentally exhausted. Use the other 30% of the time to polish the painting.

For example, a game studio might have a time budget of 4 weeks to build a mech. The designers might spend 3 weeks designing the mech, and give the 3D modeler 1 week to build it. This turns out a shitty mech.

Khang asserts that an alternate method is to spend only 3 days designing the mech, and give the rest of the 4 weeks to the 3D modeler to build it! Wow!

I really want to give this method a try. When I was majoring in Design at Carnegie Mellon, they really emphasized the importance of design and innovation. We spent the entire semester doing a bunch of stupid iterations. And by the time to build the model, I would always end up rushing it and doing a shitty job. Perhaps, I should try focusing more of my energy on execution rather than design. This feels like a more practical approach.

New Tools I learned
- *select color range* - like selection tool but more custom
-  hue/saturation - isolate specific color channels in drop down menu
- unsharpen mask filter - Craig Mullins uses it to give the illusion of even more detail.
Posted by Chris Chien at 9:50 PM 7 comments: Links to this post

Hey guys. Doing a February recap on 2013.  Late is better than never.

Strategy: I attribute part of my success to being very focused and direct with my portfolio.  I researched dozens of theme park design firms, interviewed people who worked in that industry, and marketed myself effectively by creating industry specific illustrations.

Getting Help:  I only took one art class this year -  with Gary Meyer - an art center  professor who has experience with theme parks illustration. I also sought help from Greg Pro - another theme park professional who was very generous with his time and help. I joined the TEA - a network of theme park professionals - paid $50 in dues. I enrolled in an online class about theme park rides that cost around $75. I paid $700 to attend a theme park design conference in Georgia.

Summary: I was strategically investing in my career. I would spend money and time on things that I KNEW would get me one step closer to that job. The decisions I made - such as attending that conference - were very focused and deliberate.

Focus on what's important: I think a lot of students (including myself) waste a lot of time NEEDLESSLY improving their artistic foundation. I think the importance of figure drawing and landscape painting is overvalued in art classes, and overglorified by art instructors. In years prior - I was creating generic concept art that was for games and  movies - which was not relevant for the themed entertainment industry.  I was spending a lot of time with figure drawing, painting, landscape painting, sketching etc… not relevant to the industry.  It's important to focus on the entree, spend less time on side dishes. 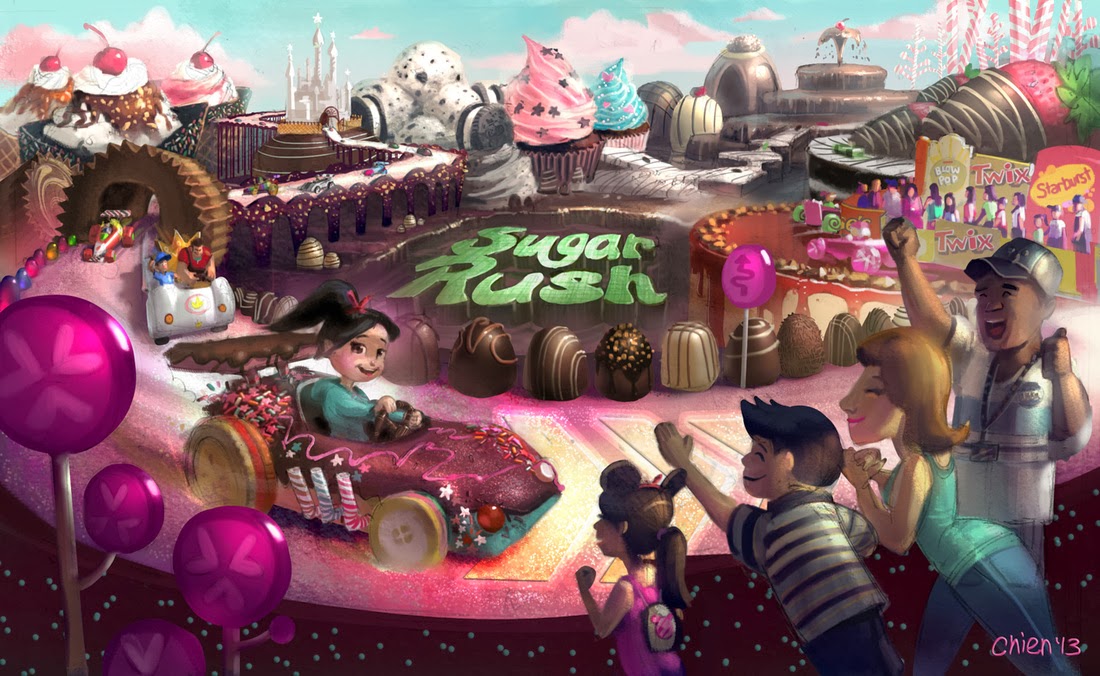 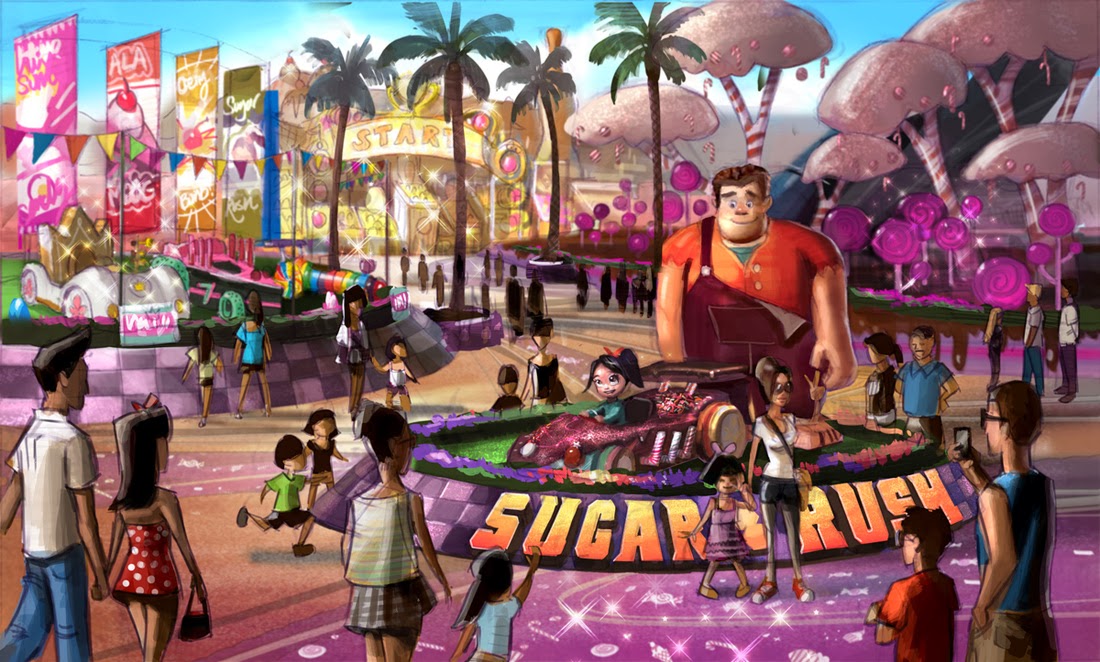 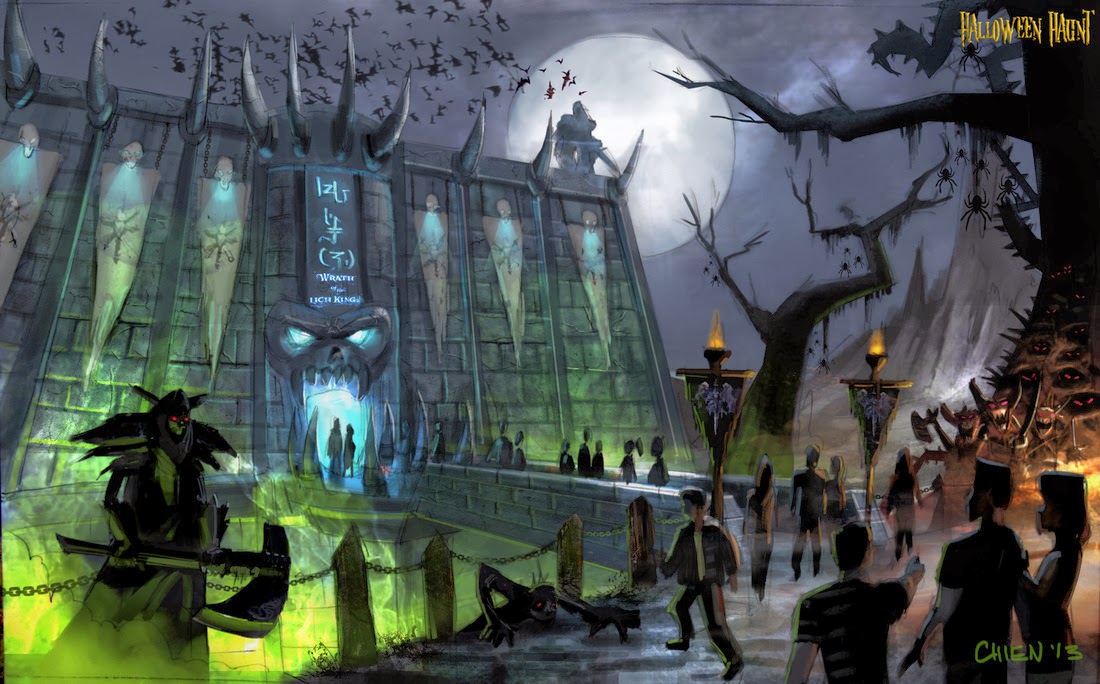 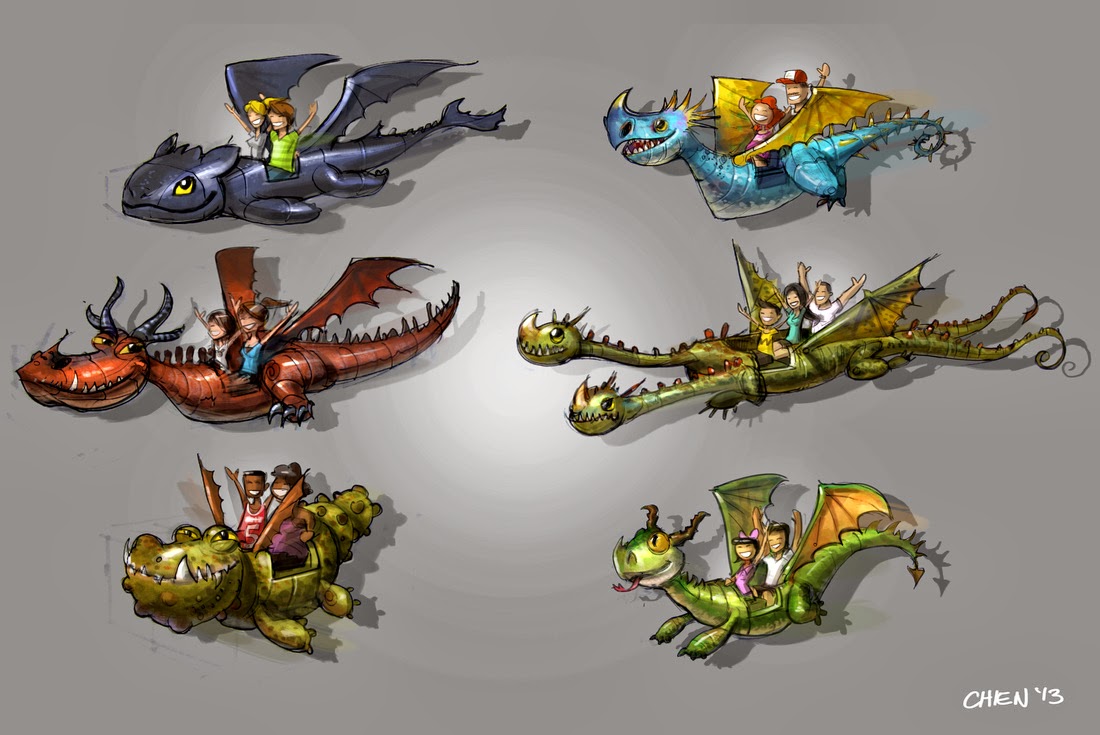 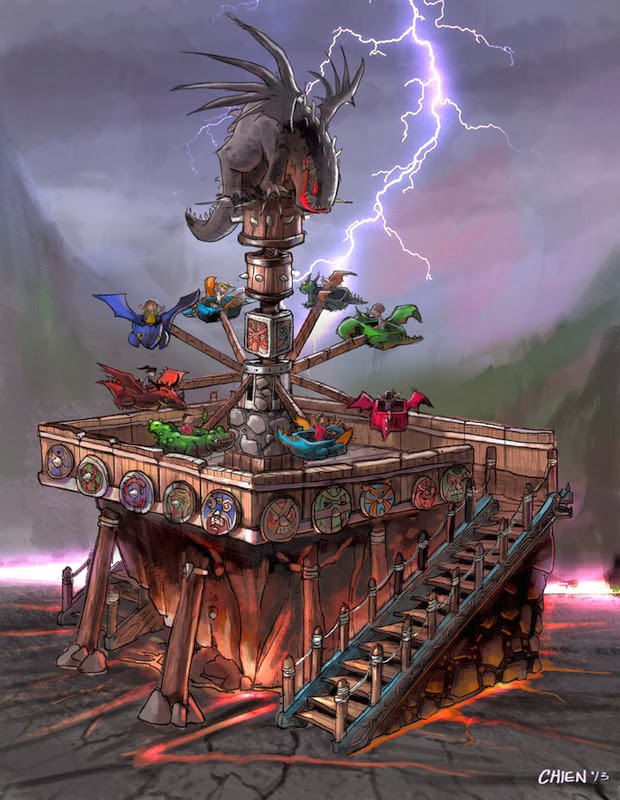 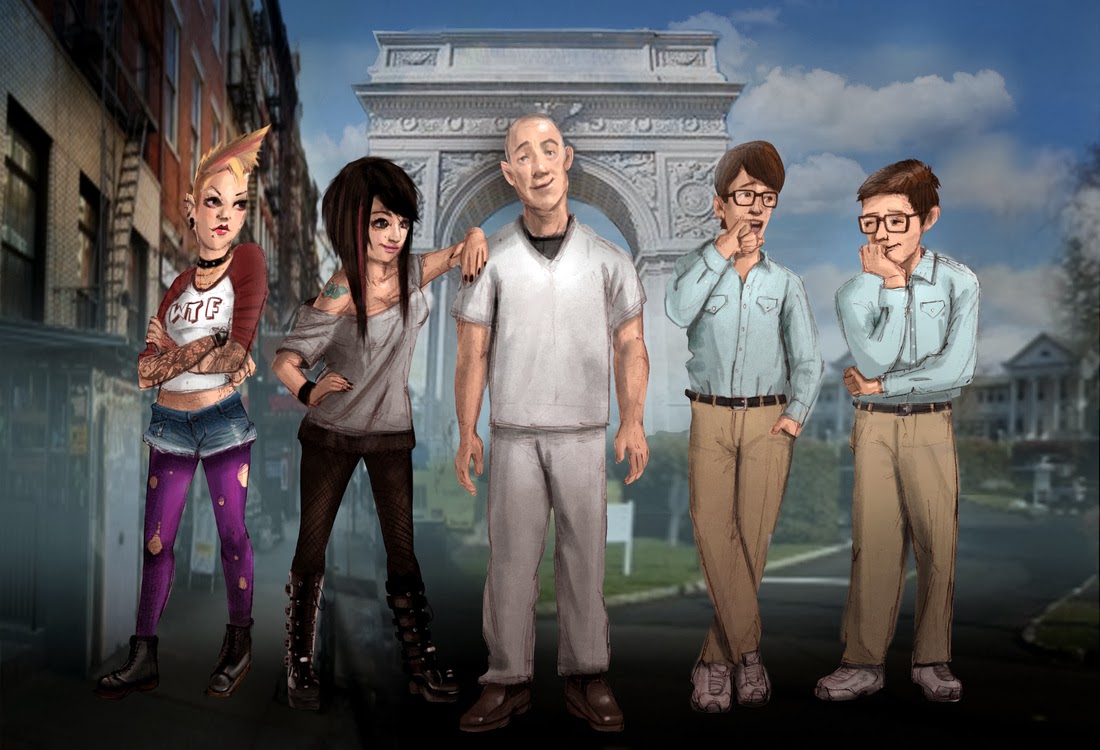 The last image is for a movie poster illustration.
**All other images were created specifically to target theme park companies**

2) Legendbrush Name Paintings
Another thing that was a huge part of 2013 was my name painting company. I started the company in Nov 2012, quit my Disneyland job in May 2013 to focus on my own company as well as my Theme Park Illustration portfolio.

I've spent a lot of time growing this company and it's paid off. I no longer regularly set up Booths at Boutiques and farmers markets (while it was really fun, and I got to spend time with friends and family, the income was not predicable and it was physically exhausting). Currently, I almost exclusively sell artwork on Etsy.

My original goal for my company was to go to an Anime/ Comic Con as an artist alley - and I've fulfilled that wish already. I also wanted expand my artistic horizons by familiarizing myself with many different randoms and genres, as well as gain experience in marketing, accounting and running a business.

I spent a lot of 2013 reading a LOT of books. It's mostly self-help, psychology, business, and spirituality. My relationship with my ex-girlfriend ended in March, and much of the rest of that year was spent soul searching and understanding life.

Book on Empathy and Love

I Thought It Was Just Me by Brene Brown

The Heart of Love by Dr John F. Demartini
The 5 Love Languages by Gary Chapman
A Return to Love by Marianne Williamson

Holy crap! I've read a LOT of books. I post a lot of my notes and reflection on my other blog: Practicing Humility.

I co-founded a weekly art blog with Erik Ly called "Every Sunday Post." We currently have 330 posts,  around 5-10 active members and we have been active for almost a year!

Yeah it's been a very great year!  A lot of people have helped me. It hasn't been all easy, but I've certainly learned a lot.

For theme park illustration, I want to focus on speed and getting more work. I really hope to work a full-time position at a studio - where I would have fun and really enjoy my job. I would like to create 30-50 new illustration by the end of this year. I will need to develop a plan to get to that level. :)

For Legendbrush, it's been a really successful year. I want to do a line of positive affirmation name paintings because I feel like that could have a big impact on other people's lives. I have Anime Expo coming up in July - which will be fun.  But ultimately, I want my theme park gigs to bring in more money so I don't have to worry about doing so many name paintings. :)

For books, I've read and absorbed so much knowledge. I want to take time to digest and really apply that information into my daily life. I also want to write a book this year, compile, analyze and create meaning connections with the information that will help other people.
Posted by Chris Chien at 9:15 PM 2 comments: Links to this post